Sine; former 2009 Africa Star winner in Gabon seems to have had a time of his life with an outstanding performance at the "Malaria No More" event hosted in Hillary Clinton's honour in New York. 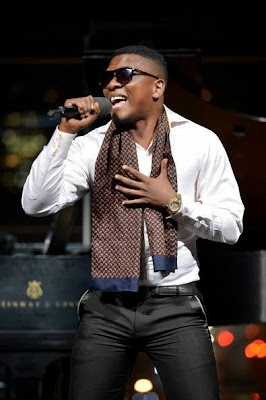 "Malaria No More" was born out of a discussion between Chernin, Chambers and former MPAA chief Jack Valenti at Allen & Co.’s annual Sun Valley conference for moguls and billionaires. Further study made Chernin convinced that malaria could be eradicated in his lifetime.

But because the disease that still kills a child every 60 seconds (mostly in Africa) is entirely preventable and treatable, he brought a CEO’s mentality to launching an organisation with a clear business plan to raise awareness, spread low-cost treatment and most of all, preventative measures such as distributing insecticide-treated nets to keep mosquitos away.

Here is what a journalist had to say about Sine's performance:

"The evening closed with an upbeat perf from Cameroon pop star Sine, whose ability to shake his rump in skin-tight pants was the subject of much discussion as attendees made their way out of the Time Warner Center. The event raised more than $1.2 million..."

(Excerpts from variety.com)
Posted by Dulce at 8:53 PM