Name of artist: West Don (aka Anjoh Felix)
Location of artist: Kumba, SW
Title of track: Ajebota
Synopsis: love song about a wealthy girl in love with a guy but pretends not to admire him in his presence and declares her love for him to her circle of friends.

Watch the video below!! 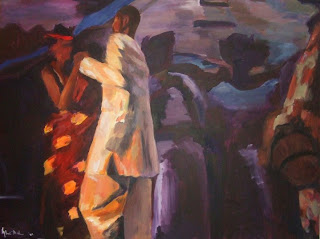 What would you do to get your hands on a valuable work of art? Well brace yourself as the artist behind  SHIRI ACHU ART is running a competition where you, yes you, can get your hands on a signed limited print of 'Midnight Tradition' (below left) - where ever you are in the world!

What do you have to do? Well, you know there's always a catch! This is a good catch though. Describe her art best in no more than 10 (succinct) words. That's all!

See, as easy as abc!

A panel of 3 judges will choose the winner.
Ready, steady, goooo!!
To take part in this competition, you must go to her fan page here. 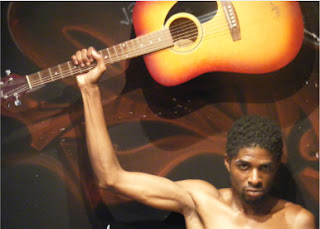 We are back again on DC with another talent feature. This time, we would like to bring to the surface a very very talented brother who has been hiding (in our opinion) in Cameroon.

Listening to his tracks seems like you are being transported into another world where there is just you and the music and a sense of peace and nothing else! To say his music is calming and lyrical is an understatement.

Okay, so here goes our catch up with him.
Happy reading y'all!!

DC: Thanks Edel for talking to the Dulce Camer blog. How are you?
Edel: I’m fine.

DC: Who is Edel Koulla? Give us an insight into your personality and your life in general.
Edel: I’m a young Cameroonian male of 29 years old; I’m a pleasant guy I think. I like hanging out with friends, talking, playing music... I live in Douala with my fiancée. What else? I’m a real Football fan. Lol!

DC: How did the music performing side of your life kick off?
Edel: I left Cameroon for France when I was 18 and had no real interest in music before then. But before going abroad I had listened to a song of a new artist called Craig David and when I reached France I bought the album at once. Then I began to mimic his style and that was the beginning. Trying to sing like Craig David in order to charm girls...! Later I found my own style and I earned the respect of other artists and that made me one of them.

DC: What can you tell us about your performing experiences? How do people treat you?
Edel: Lol! I think they love the songs more than the artist. I have people singing my songs without knowing they are mine. Since I haven’t issued a video yet I am not that visible. But I have fans that follow me faithfully.

DC: What are your opinions about the Cameroon music industry and scene?
Edel: There are 3 different “vibes” I may say:
You have the Makossists (Petit Pays, Hugo Nyame etc).
Bikutsists (Lady Ponce, Tsimi Toro), and all the other Cameroonian urban wave.
You have The “Diasporés” we can sum them up as world music (Manu Dibango, Etienne mbappé and all the famous bassists + etc).
And now the youngsters, Hip hopers, Soul singers, Rockers (Valsero, Sidney Tum, Danielle Eog, Jay-N etc).
The first and second are reigning on the Cameroonian scene because their music and personality are much appreciated and therefore very popular.
The third are popular too but the main reason of that is because they succeed abroad. You hardly will listen to their music in a popular context.
The last are fighting to join their elders’ on their target goals.

DC: A lot of very talented musicians are springing up in Cameroon which is very good for the artistic upkeep of Cameroon. What do you think the future holds for them? How far can they go in your opinion?
Edel: They can go on top of the world. The Cameroonian mentality proves itself in terms of achieving great things out of any kind of hostile environment. The best is still to come. Artist like Irma are just the sign that this generation will be much productive in term of art.

DC: You will be releasing a 2 track LP which includes the tracks “Muna Kamerun” and “Ombwa Mba” which you collaborated with the label “Coach” to produce. How did that collaboration come about and why only 2 songs?
Edel: First the label “Coach” is owned by the actual producer of this LP, Ms Diane Eteki who followed my progression since I came back to Cameroon in 2008. She believed in me but she did not have the means to sign and produce my songs. Then we agreed on keeping things moving by signing a contract for a 2 song LP which will permit me to enter the market and interest possible producers.

DC: What has struck DC a great deal about you and your music is your ease to express yourself clearly both in English and French. Well done by the way! How did you learn English and why do you want to sing in both languages and in the Douala dialect?
Edel: I learned English mostly by watching T.V. funny enough! In fact since I was little I have been fascinated by that stylish language so I’ve always practised it for as long as I can remember. Even though I think I am still not perfect. And well! Cameroon is bilingual right? Then it’s just how I am, a Cameroonian making his music about who he is. That goes for the Duala too. We have to show the world how diverse we are.

DC: Well answered above! Your track “She loves somebody else” is a killer track!! DC loves the lyrics, the composition of the music, your voice; in fact everything about this track we love! What is the story behind this track? Is it autobiographical?
Edel: Actually yes but the fact is that I was the one to blame when her behaviour changed since I was an “unfaithful foolish” bastard and she told me so because she wanted to hurt me. And she succeeded a great deal!

DC: What else are you passionate about in life?
Edel: Football! I love football more than even music you know... I was really talented but my father wouldn’t let me enter a football school.

DC: Who would you most like to collaborate with in your music?
Edel: Ouhh! Petit pays, Ryan Leslie, Diddy, I will waste your time they are too many!

DC: What does the future hold for Edel Koulla?
Edel: The best I hope...

DC: Any advice for those wishing to get into the music scene?
Edel: Damn man!! You have to know that it’s all about sacrifice. Once you have killed the guy the world wants you to be, then you can be who “You” want to be.

Listen to the track "She loves somebody else" here

To become an Edel Koulla fan, check out his details below. Tell all your friends to tell all their friends!!

Watch the "Going down on u" on the street video below.

That's it!!
Don't forget to keep sending us names of the Camer talents out there!
Brownschuga@yahoo.com

It is always great to see fresh innovative ideas on the rising African scene.

Olafemi and Deena, the brain power behind the Deenola fashion brand are fusing their creative and style flair to recreate various mini scenes/stories in different cities to promote their concept "Blind Date" which according to Olafemi will get people to see the clothes whilst being emotionally connected to the brand.

So what is the story in "Blind Date". It is the story of a young woman going through the tribulations of life wearing Deenola pieces against the backdrop of different cities. On this first episode she is due to go on a blind date with a very handsome guy.

The Deenola girl is played by Portia Freno, a fresh beauty who models who recently starred in the movie Anuvahood. The love interest is played by Matteo Castagnoli, an Italian model and television producer.

The scenes were filmed in a chic, minimalistic and very modern penthouse in Green Park, London.

Joao Da Silva their cameraman and photographic director greatly translates the Deenola vision producing a clean and effective story on our screens.

Okay so I have talked alot about this series, catch the first one below!


Expect to see more of this mini series as the crew jet over to Paris to film more episodes for the brand.

The girls have already started working on their Spring/Summer collection for next year.

Keep watching this space for Deenola y'all!! 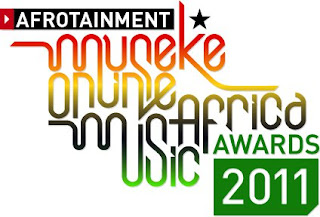 As part of its ongoing efforts to showcase African Music in North America, Afrotainment and Museke Inc are pleased to announce a partnership whereby Afrotainment will be the exclusive broadcast and media partner for Museke’s second annual online African music awards, which will now be known as the Afrotainment Museke Online Africa Music Awards.

Eric Noue from Afrotainment said: “This collaboration reiterates Afrotainment’s commitment to the North American market with an African music awards show being broadcasted for the first time Live on National TV in North America and via web streaming worldwide, reflecting yet another facet of our growth strategy”.

In an evidence of growth for the online awards, the Afrotainment Museke Online Africa Music Awards – which are currently in the nominees’ submission phase, will culminate on September 24 in Afrotainment New York City’s studios, where the cream of the African music industry will gather at an Afro-glam red carpet event to recognise African talent as award winners are announced and celebrated.

The Afrotainment Museke Online Africa Music Awards will be multicasted Live on the Afrotainment family of channels nationwide in the US and will also be viewable online via Live Streaming on the awards website, www.moamas.com and awards.afrotainment.us.

Museke representative Tumi Diseko commented: “We are thoroughly excited to have concluded this agreement with Afrotainment, an entity which shares our passion for African entertainment. Hosting and screening the awards will help to bring the African music fan closer to their favourite artists, rightfully so, as Museke.com is The Home of the African Music Fan”. The evening will feature performances by some of the best in African music as well as some artists who are well on their way to the top of the African music scene.

About Museke
Museke.com was established in 2006 by a group of African music fans from across the continent with the vision of becoming a one-stop-shop for everything related to every African music genre across the continent. The website has since grown from strength to strength, featuring lyrics, interviews, biographies, new music and videos of thousands of artists on the continent and in the Diaspora. Museke Inc aims to harness African youths’ growing access and use of internet and digital devices to create and develop a knowledge network for African talent and music.

Stay tuned for the show and also catch our extraordinary model, actress and presenter Sophy Aiida at the event!!