MANU DIBANGO, THE LION OF CAMEROON ON SHOW! 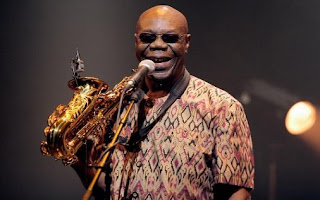 Manu Dibango is many things to many people and no wonder in a career spanning over half a century the Lion of Cameroon has proved himself a remarkably versatile force, an African ambassador, a world music pioneer, a creator of disco, a champion of new talent, a media-savvy style icon, a humanitarian and philosopher, a reporter and anthropologist, a lover of everything from funk, hip-hop and cabaret to chanson, gospel and reggae; from Latin, Caribbean and West African rhythms to Congolese sounds and his very own Cameroonian derivative, makossa soul.

At 73 Dibango is still wielding his colour co-ordinated set of saxophones, still rippling his hands over the length of a marimba/xylophone, still improvising melodic lines from behind his circular black specs. Above all else, he is a jazzman and his annual residencies at Ronnie Scott’s Jazz Club in London are the stuff of legend.

Dressed inevitably in a sharply-cut shirt, his bald pate shining in the spotlight, the Paris-based Dibango leads his trim jazz combo through sets that combine fresh African and Western grooves with good old-fashioned musicianship. Buoyed by the ability to find the right phrase at the right time, Dibango’s effortless, articulate sax playing has got even better with age, ripened by a penchant for experimentation – one of fame’s luxuries – that has seen him alongside jazzers such as Art Blakey, Don Cherry and Herbie Hancock and African musicians including Salif Keita, Baaba Maal and the great Congolese band leader, Joseph Kabasele. His big-band shows are similarly legendary. His grin is as wide as ever. 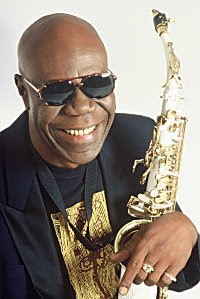