Yes, it is competition time again on DC. This time I have 2 cd's with a Cameroonian connection to give away to 2 lucky readers! They are entitled "Baka beyond the forest" & "Baka in the forest" produced by Martin Cradick and out on the 4th & 18th of May respectively. 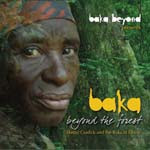 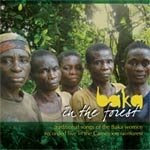 The haunting, mystical vocals on the CD were recorded on a solar-powered 8-track machine in the middle of the Cameroon rainforest which has been inhabited by the Baka Pygmies, an ethnic group of hunter-gatherers, for thousands of years. At night time the Baka Pygmy women perform powerful ritual singing ("yelli") to ensure a successful hunt. Back in the UK, Baka Beyond leader Martin Cradick deconstructed the original interwoven vocal lines and replaced some voices with bass and acoustic guitar.

As well as offering a rare glimpse into an exquisite disappearing musical culture, buying this album also directly supports the Baka who face various problems such as being disenfranchised from the forest. For people who want to hear the original singing unadorned the companion album "Baka In The Forest" is the one to get.
Also check out http://www.youtube.com/user/bakabeyond for footage from the rainforest.

Right...a bit of history lesson on DC today on the Baka Pygmies & also a bit of information on what Martin Cradick has done / is doing for these people. 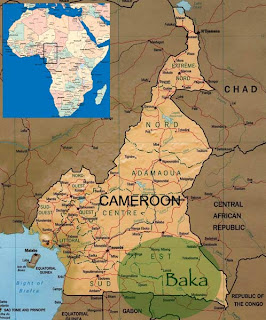 THE BAKA FOREST PEOPLE are hunter-gatherers from the central African rainforest. They mainly live in South-Eastern Cameroon, but a few also live in Congo and Gabon. Sometimes referred to as Pygmies, they are generally shorter than their Bantu neighbours, but are experts in forest life. They are reknowned throughout Africa for their hunting, musical and dancing skills.
Music is central to their lives. As soon as a baby is able to clap it is encouraged to participate in all the communal music-making. There is music for ritualistic purposes, music for passing on knowledge, stories and the history of the Baka people, and music for pure enjoyment.
Martin Cradick & Su Hart of Baka Beyond have been regularly visiting and working with a group of Baka near the Congo-Cameroon border where their lives are changing rapidly. In the time since 1992 that they started working with the Baka from a small village called Banana, they have seen many changes. In 1998 electricity arrived in Moloundu, the nearest town, bringing music and television (mainly French chat shows) to the bars.
In 2000 Banana was a tiny village with a few mud huts and Baka mongolus. Now there are several shops, and an influx of Congolese refugees has put extra pressure on the forest.Although the Baka have the right to hunt for food enshrined in both Cameroonian and international law, on the ground they are told that they are not allowed to hunt larger animals and are often intimidated into giving up even small game.
Global Music Exchange the charity which collects royalties from these cd's are actively working to raise the status and self esteem of these people, as well as educating them and those around them about their human rights.
For more info, go here: http://www.baka.co.uk/
BAKA BEYOND UK TOUR DATES: catch them if you can!
7 May - The Junction, Cambridge
8 May - Bush Hall, London (album launch party)
9 May - Folk on the Pier, Cromer, Norfolk
15 May - JuJu Club, The Red Room, Sheffield
16 May - Bongo Club, Edinburgh
20 May - Thekla, Bristol
21 May - Mind Body Spirit Festival, London (trio gig 2pm, Baka singing workshop 4-8pm)
22 May - Wombwell Festival, Barnsley
23 May - Princess Pavillion, Falmouth
24 May - Acoustic Festival of Britain, Catton Hall Park, Derbyshire
27 May - The Spiegel Tent, Bath Fringe Festival
28 May - The Globe, Hay-on-Wye
29 May - Queen’s Hall, Narberth
31 May - Sunrise Celebration Festival, South Somerset
*************************************
So...here is the competition info:-
QUESTION: Based on the information provided on this post, APART from Cameroon, in which other countries do the Baka Pygmies live?
ANSWER: Send the name of the countries to brownschuga@googlemail.com
The 2 lucky winners will be contacted when the competition ends on May 18th.
Goodluck all!
*************************************
Stay sweet
Dulce
xxx
Posted by Dulce at 9:21 AM

brilliant piece DC. i feel so educated now. i beg can i disown u for a day lol