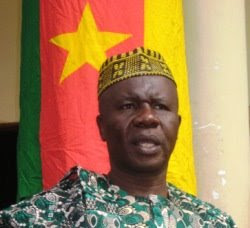 Lapiro de Mbanga’s lawyers have urged judges at the Mungo High court to free him from prison. The controversial singer, whose real name is Pierre Roger Lambo Sandjo, was arrested and jailed for inciting riots in his hometown of Mbanga, following nationwide food price rises last February. His lawyers contested the accusations and questioned the integrity of witness statements. At an earlier hearing Mbanga Chief, Magellan Mukete Ngoh suggested Lapiro as the architect of strikes in which youths burnt down public and private establishments. However the star’s defence team refuted Ngoh’s testimony “How can Lapiro destroy a town whose reputation he has built for so long,” asked Barrister Rene Manfo. Lapiro’s briefs also pointed out police failure to arrest two men allegedly linked to the charges brought against him. Baptist Tagakoum, president of the commercial motorcycle union in Mbanga and another man Sam Boga, were implicated in court by Mbanga Divisonal Officer, Simon Nkwenti. Previously, prosecution judges said all evidence implied Lapiro’s guilt. The crooner, also known as ‘Ndinga Man’, shot to fame in the 1980s with album "No make Erreur", which translates as "don’t make a mistake". His quasi rapping style and exotic use of French and Pidgin English-influenced street codes captured the nation’s imagination. Despite endearing him to the masses, his outspokenness against government misdemeanours led to several run-ins with the administration. Lapiro’s lawyers condemn his recent ordeal as a travesty of justice. The case continues on September 24.
By Ngum Ngafor
Thanks Ms Ngafor again for the above.
Keep reading Dulce Camer y'all.
Thanks for all the support again so far and a particular thanks goes to Kamer (his blog is to the right) and Etum (of africa2point0 blog to the right too) for placing my blog as one of his blogday 2008 entries. He described my blog as being "in"! Wow, already!!! I am ever so grateful!
Stay Sweet
Dulce
xxx
Posted by Dulce at 9:23 AM

They should release Lapiro ASAP! Their accusations are just ridiculous. Does someone have an axe to grind?

Excellent writing Ngum. The headline to the story made me giggle and brought back some old memories too. I hope Lapiro is freed soon and continues to entertain us is his unique style