FRU NDI COULD BE DONE FOR MURDER.... 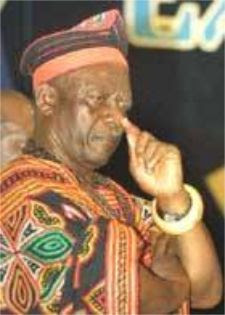 Opposition leader John Fru Ndi could go down for the murder of a member of his party.

Gregoire Diboule was slain during clashes between rival factions of the Social Democratic Front (SDF) in May 2006.

At the Mfoundi High Court, Yaoundé, the SDF chairman was charged with being an accomplice in the militant’s murder.

Fru Ndi was also accused of ordering the disruption of a Bernard Muna-led breakaway convention in Cameroon’s first city. Diboule died in a resultant altercation.

The prosecution allegedly bases its case on evidence from poorly verified newspaper interviews given by former Yaoundé-based SDF leader, Colonel Chi Ngafor. He is currently detained at the Kondengui Prison.

According to The Post newspaper, a local tabloid quoted the ex-military officer as saying that Fru Ndi ordered him to use any means necessary to disturb the convention, which the chairman considered illegal.

The paper also learnt that a letter, detailing apparent instructions from Ndi to Chi Ngafor about disconcerting the gathering, is spreading in Yaoundé.

However the SDF frontman’s supporters question its authenticity.

"Remember that somebody fabricated a document claiming that Fru Ndi has FCFA 20 million in his London account".

If there is any document being circulated, it is that kind of thing,’ said defence lawyer, Joseph Mbah Ndam.

He recently sued Minister of Territorial Administration and Decentralisation, Marafa Hamidou Yaya, for character defamation.
By Ngum Ngafor
Posted by Dulce at 2:48 PM