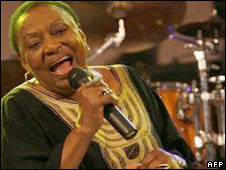 dulce you said it. i was thinking exactly the same thing re the obama victory. for someone who lived so close to america's fight for racial equality, i'm sure she had some thoughts that amazing tuesday night.

i'll remember her most for "pata pata" and "malaika," the swahili folk tune which she immortalised. i also can't get the picture of her and paul simon performing on his graceland video.

my biggest regret is that i never got to see her live. i don't think i quite appreciated her music and so i missed the opportunity to see her perform in manchester a few years ago. that's one decision i'd change in a flash.

in her music, charisma and infectious smile, mama africa lives! may she rest in peace with all the ancestors.

oh dear, so many emotional events in less than 2 weeks! I am glad at least that she lived to see a black man taking over America. Let's be sad she left, but also glad because she will now be with her late daughter Bongi Makeba.