HIS NAME IS MUNTU, MUNTU VALDO

From an early age, Muntu Valdo realised that music, song and poetry would allow him to discover the depths of his true self, and that art would help him steer clear of life’s pitfalls.
Muntu is a “Douala” and as such, part of the “Sawa” community stretching along Cameroon’s coastline.
Muntu prefers the concept of “reconciliation”: bossa nova, afro-cuban, blues, soul and funk, which all have their origins rooted in the Diaspora and Slavery.
An outstanding guitarist, singer and harmonica player, his own repertoire of compositions was already well developed when he began to appear alongside the great names of African and International music, Lokua Kanza, Keziah Jones, Etienne Mbappe, Bébé Manga, André Marie Talla etc This was followed by several acclaimed supporting concerts for Tony Allen, Lionel and Stéphane Belmondo, Richard Bona etc
Lokua Kanza is adamant that Muntu’s melodic inspiration and harmonic invention is worthy of the international scene, Manu Dibango (Cameroon’s very own godfather of Jazz) simply tells us that his music must be listened to!
Herewith is my interview with the very cool and chirpy guy.
Happy Reading y’all!

DC: I love coming from Cameroon because…(complete)
MV: Because it is my motherland, my parents are from there, all my family, my close friends, I have a strong link with everything there, from the land, to the colour to the odour. I am proud of my roots and my roots are from there.

DC: Describe to us your music.
MV: My music is like a dialogue that comes from my heart to the hearts, spirits and souls of others. It is like a material for meditation, for thinking. It is like a vehicle for happiness. Some people call it “Sawa Blues”, the most beautiful music in the world is what I want to do.

DC: What is your inspiration?
MV: My inspiration is everything, it is the sky, it is my dreams, my imagination, it might be you or a certain story. It is almost everything but it depends on my mood and the moment.

DC: Your 2005 self produced and released album “Gods & Devils”, why did you choose that title?
MV: Erm, first of all that title is also a title of a track in the album. This album talks about my background and this track describes the opposites of everything that has been created, the good, the bad, the heaven, the earth, male, female. By choosing the title “Gods & Devils” it invites people to be aware of these two sides that we have in us. We are all gods and devils but we must fight the devil side to become more godly. That is what this album and this track strives to do, to promote a godly character. In the Douala language, it is called "Moiyé na muititi" which means light & darkness. 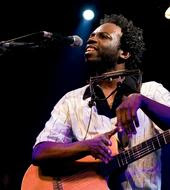 DC:Describe the “feel” or “tone” of the album?
MV: First of all, this is my first album as a solo artist. I have already participated in other albums as an instrumentalist. This album is autobiographical. It talks about my background and me. It is my language, my message. You have 3 languages in this album – English, French and Douala and this shows my identity. Because I play more acoustic instruments, the album is mellow and relaxing and about 70% was recorded in Cameroon so you can hear the “rawness” of the instruments.

DC: Where can one purchase your album "Gods & Devils"?
MV: It is sold at the music shop of the Barbican (Farringdons) at a price of £12

DC: Who is Muntu Valdo, the person?
MV: I am a product of God who aims to become godly. I am a person who thinks that we should all care for one another. I am a bit of a dreamer, a utopian, I see the good in everybody and I believe in human beings even though they are wicked. I hope in my music, I can leave something behind.

DC: Is there a difference between Muntu Valdo the person and the artiste?
MV: The only difference is that the artiste is a creator.

DC: Why have you got the track Gods & Devils & Des dieux & diables? In English & French?
MV: It promotes my identity, my culture – the identity of Cameroon as we speak English, French and our own native dialects. I first wrote this track in French and because I also wanted my album to be global / universal, I didn’t want this track to be simply translated so I did the English version too.

DC: Would you consider yourself religious?
MV: Erm, no not really but I am not an atheist. I believe in God but I do not belong to any religious denomination. I see that religion creates wars in the world. Too many religious groups fighting each other rather than promote peace. I am not saying that religion brings wars but in my opinion the only religion you need is LOVE.

DC: Where would you like to go with your music?
MV: Erm, I want my music to be beneficial to all humans

DC: Are you receiving support from Cameroonians back home in Cameroon?
MV: Yes they do, you have people who really love my music who would follow me to my concerts. Take for example last November, I did a tour of some big cities in Cameroon, Yaoundé, Buea, Douala, Bamenda, Maroua, Garoua and Dschang, this was organised by the Coopération Française and the Alliance Franco-Cameroun and they were totally sold out. It is funny because I am not very well known yet but the few people who know me follow and support me all the way. 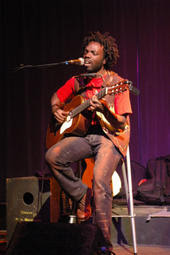 DC: And those living abroad, do they support you?
MV: Yes they do too. I receive emails everyday from people who get to know me through my concerts or through word of mouth.

DC: What is success in your eyes?
MV: Depends on each person but my definition is when I see people really happy at my concerts. I did a show during the Africana concert and during my slot, everyone was singing with me, that was really heartfelt! To see my work appreciated and for people to say I have done a good job, that is my definition of success.

DC: The way artist rights are treated in Cameroon is very different to the way they are treated in the Western world, what do you have to say about this?
MV: It is a reflection of the organisation of our country. There are no music schools and they do not even teach music in Cameroon so they don’t even respect the musicians. Only when you become a big star that they respect you. When you are starting out, people consider you to be stupid and lazy. With this point of view, why would they fully organise the music industry?

DC: Does the Cameroon government have to do more to change this, in your opinion?
MV: They are the ones ruling the country so they have to organise it!

DC: Are you working on new materials?
MV: Absolutely, absolutely! Watch out, hopefully by the middle or at least the end of next year, you will have something released.

DC: So are you working on a new album and when is it due?
MV: Yeah, yeah, working on a new album but I don’t know when it would be released. This time I wouldn’t release it myself simply because it was a tough tough job trying to do everything from managing, to promoting to being an agent, you don’t have time to be an artiste. It did allow me to tour the world though!

DC: Would you encourage anyone to go into music like you did?
MV: Yes, why not. If someone has the skills and the talent, I would encourage them but they will have to know that it is not really easy especially from the start. You must work hard.

DC: If you were not into music, what else would you have liked to do?
MV: Either becoming a lawyer or a football player, who knows! I had a lot of skills when I was growing up.

DC How do your family react to you?
MV: Some of my family are supportive and some are not. My mum has been supportive from the start but my dad was not because he was expecting me to have a “normal” job. For him, he couldn’t understand why I wanted to become a musician.

DC: Have they ever come to see you in concert?
MV: Yes, my mum always comes but last year during my tour of Cameroon, my dad even came too and at the end of the show, he came to congratulate me. That was very good!

DC: Ok, well thanks Muntu. All the best!
MV: Thank you

Dulce, you have outdone yourself! This guy is the BOMB. I had never heard of him before, but now I have thanks to you :)
His music is like food for the soul.Very very beautiful. I like all the songs you put up, and that is something, considering I hardly take to songs at the first listen. Nice. More grease Muntu.

Dulce,
You are a living proof that the future of *female cameroonian bloggers* IS BRIGHT! Keep the light shining as bright! ;-)

this guy is such a wizard! i fell in love with gods & devils the very first time i heard it on calabashmusic.com. 'di mala' is such a wonderful song. it brings back memories of those amazing douala choirs.

nice blog. keep it up