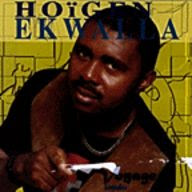 Sorry to put this up late but better late than never!

News of the 50-year-old star’s demise was announced last Thursday.

He allegedly died of kidney failure-related complications at the Laquintinine Hospital, Douala.

According to Cameroon Radio Television (CRTV), the crooner had been ill “for a while” before his condition worsened.

Ekwalla shot to fame in the 80s with hit “chat botte,” which earned him the Best Music Award in Cameroon.

Ever passionate about his craft, Ekwalla was an outspoken critic of the Biya government’s insufficient efforts to tackle musical piracy.

The celebrity, who described himself as “humble and calm” performed to acclaim in Cameroon, Europe and the USA.

Friends say he was working on an album which was tipped to re-launch his career after a long hiatus.

Dulce Camer would like to pay special tribute to the great Hoïgen Ekwalla. Please share your thoughts and memories of him and his music.

RIP Hoigen, he sure was part of my childhood.

u know what i mean girl? i cry me soteh. i just remembered all his tunes. he was such a talent and 50 is so young!

It is a loss to all Makossa-lovers. May his soul rest in peace.

This is such sad news, I have very fond memories of listening to his music growing up, esp 'chat botté, chat botté, chuba! chuba!'. He will be sorely missed. May his soul rest in peace.

Ohhh Betty, your comments brought tears to my eyes! It was a combination of me reminiscing about my childhood and the fact that he died so young. Weeeeh, RIP Hoigen.