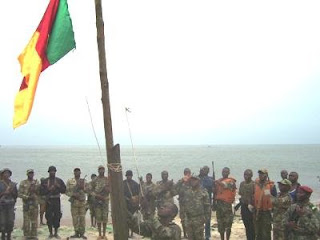 As the people of Bakassi ponder an uncertain future under Cameroon, members of the Cameroonian armed forces are allegedly demanding compensation for their role in the country’s acquisition of the oil-rich region. According to The Post newspaper, unnamed insiders at the Ministry of Defence say army officers want the government to recognise and financially reward their contribution to ending the Bakassi crisis. "In the face of any trans-boundary conflict, especially when the security of the state is at risk, the defence forces are given special attention and eventual compensation if they triumph. 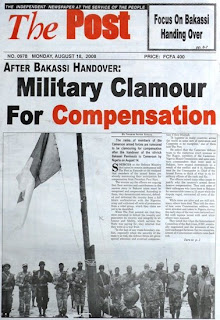 It happens in many countries across the world as some sort of motivation and Cameroon is no exception" an army official told The Post. The officer also cited battle-related illness and death as justification for compensation to soldiers and their families. However critics argue that they should not be overpaid for doing their duty of defending the nation. Bakassi was ceded to Cameroon by Nigeria on August 14. It was the subject of a long-standing conflict between both nations. UN chief Ban Ki-Moon hailed the peaceful transfer as "a model for negotiated settlements of border disputes". Nigeria and Cameroon will now cooperate to explore the region’s untapped oil fields.
Here's to peace and prosperity between us and our neighbours eh!
For more on the Bakassi people’s views on Cameroon visit the Post News on the link to the right.
By Ngum Ngafor
Many thanks to my new contributor Ms Ngafor for the above news. Please do let me know if there is anything you want me to cover. I would also love to include upcoming events and shows on this blog, please email me on brownschuga@yahoo.com
Watch out for Feature number 3.
Stay sweet
Dulce
xxx
Posted by Dulce at 9:19 AM

Good thing you're doing here Dulce. I like your blog. I like your stories. You and me we think alike ;)
Will definitely keep on checking your blog. You encourage me to restart my blogging.

On another note, there's this other Cameroon forum I'm a part of. Also quite interesting. I think it will appeal to you as well. You can check it out www.camerforum.com and contribute if you can.