There is no stopping starboy Stanley Enow right now so if we cannot beat him, we might as well join him right! Okay, right so get this he has become the first Cameroon based artist with a Twitter verified account...check image below. 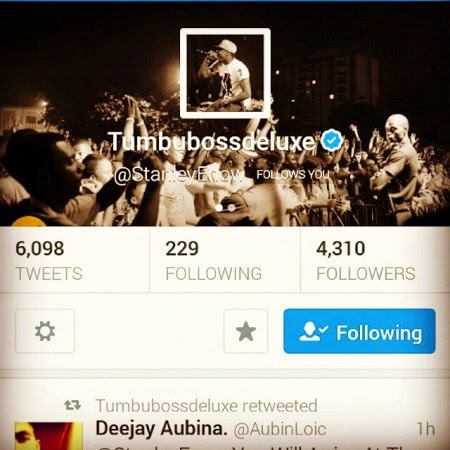 Following his MTVBase Africa Music Awards (MAMA) nomination about 6 weeks ago; a first for an artist from Cameroon for that matter - the excitement within the camp shot up 200%. During this period a gruelling daily voting campaign was put in place which received a massive support response from the Cameroon online public. The #VoteStanleyEnow hashtag was prominent online with daily photos of support from fans and supporters.

During this period also, Stanley Enow made his first trip to Europe where he wowed at various venues in Paris, France and in Frankfurt, Germany as well as featured on various influential medias such as Africa24 news, Télésud and BBC Afrique.

Stanley Enow has made breaking rules and creating history a habit. Here below is the all time magic unforgettable moment...

Next up is the Afrimma awards in the USA where Stanley Enow has been nominated, read more here. Fingers crossed for more great news!